As a chiropractic physician, Dr. Madosky believes that optimal health occurs when all systems of the body are allowed to work without dysfunction or disease. Simply put, a healthy body requires a healthy, energetic nervous system.  Through the use of chiropractic care, acupuncture, nutritional support, exercise and mind/body integration techniques your brain-body-nervous system pathways can be strengthened allowing you the ability to deal with the stresses of daily living more effectively and with greater ease. 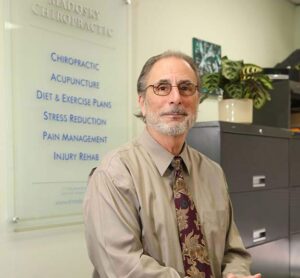 In 1975, Dr. Madosky earned a degree in nursing and spent 10 years caring for patients in critical care areas. Dr. Madosky has been a regular contributor to the St Louis NBC affiliate, KSDK, and has appeared nationwide on network and cable stations discussing pain management, preventive health, and other health topics. He has been featured on St Louis radio stations KMOX and KWMU. His articles on health and wellness have appeared in various local and national newspapers and magazines.

On weekends Dr. Madosky can be seen bicycling on the roads of the St. Louis region.